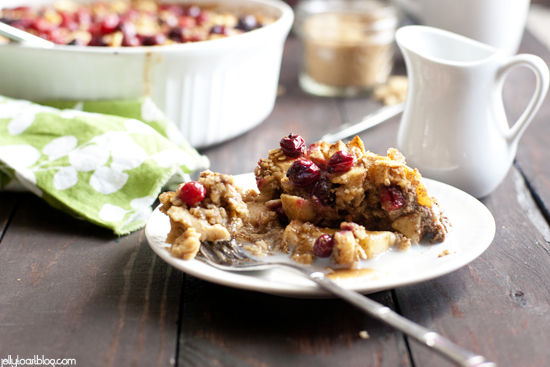 I have to admit that when it comes to breakfast, I can be down right lazy. At least when it comes to my breakfast. For my kiddos, I will whip up some crazy shaped pancakes, cheesy eggs and even a scone or two. My breakfast however, usually consists of a cup of coffee (which I love) and a bowl of cold cereal (which I tolerate). 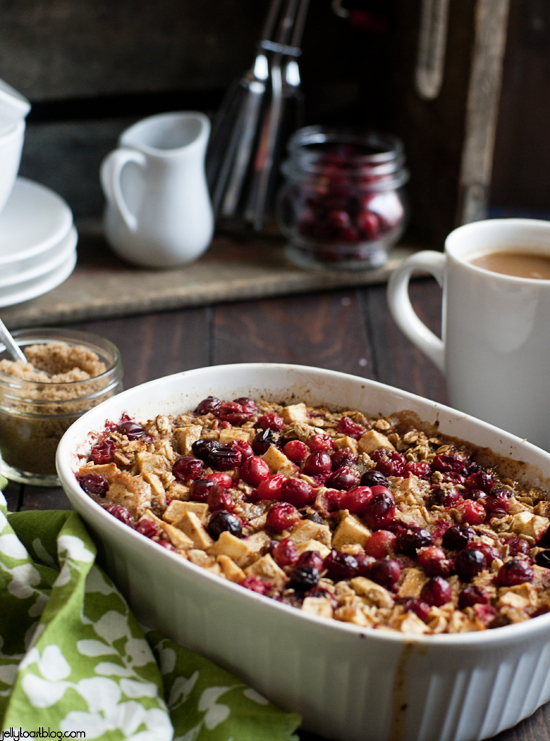 In my goals for the New Year, I decided to tackle my sad little breakfast routine and turn it into something great – at least once in a while. 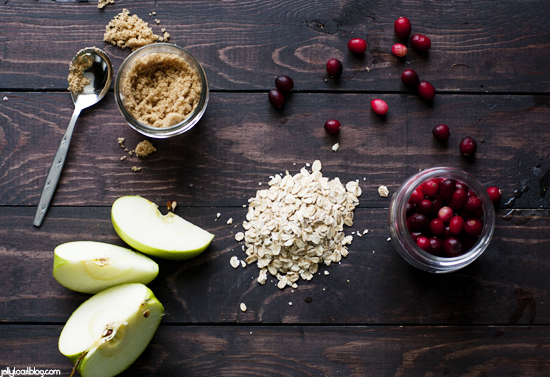 Enter baked oatmeal with cranberries, apples and cinnamon. I have seen several recipes for baked oatmeal, and figured this would be a perfect way to amp up my mornings. A bit of warm, sweet and fruity oatmeal is a wonderful way to perk me up. And I am someone who definitely needs a perk or two.

Fighting my lazy morning ways, I decided that I would try my hand at my own version of baked oatmeal. For me to love oatmeal, it needs to be packed full of fruit. And some sweet stuff. I am still overloaded with frozen cranberries from the holidays, so throwing some of them in was a no-brainer and the apples came as a natural next step. The whole thing gets sweetened with brown sugar and a bit of cinnamon. I even threw in some ground flax seeds for added nutrition and fiber. Healthy of me, huh?

This baked oatmeal with cranberries, apples and cinnamon turned out crazy delicious and off-the-charts comforting. At least compared to my cold cereal, but really it wasn’t even a competition. Plus, the leftovers were fantastic the next day. Reheat a serving of the oatmeal and add a splash of milk and a drizzle of maple syrup and you won’t believe you’re eating leftovers.

Because this made perfect leftovers for the next two mornings, I didn’t even have to make breakfast at all for two whole days. And that brought me right back to the lazy mornings. I really need to work on that. 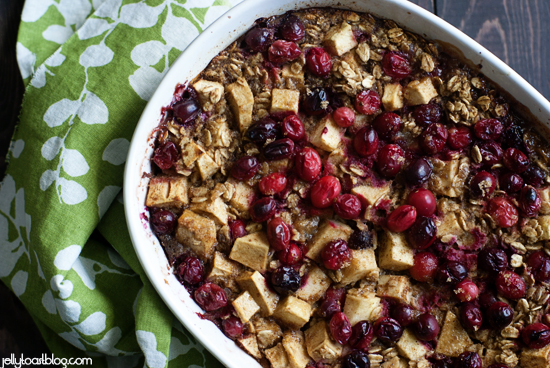 Preheat oven to 375°. Grease a 2 quart casserole dish or 8” square baking dish with non-stick spray and set aside.

In a medium bowl, stir together oats, flax seeds, baking powder, cinnamon, salt and ¼ cup of brown sugar and set aside.

In a second bowl, whisk together honey, milk, egg, and vanilla. Pour milk mixture into the dry ingredients and stir with a spoon, making sure all of the ingredients are evenly mixed. Fold in the cranberries and apples.

Pour mixture into prepared baking dish. Sprinkle the top with 1 Tablespoon of brown sugar. Bake, uncovered, for 40-45 minutes or until oatmeal is golden brown and bubbling.

Allow the oatmeal to cool for several minutes, drizzle with syrup and serve!

7 comments on “baked oatmeal with cranberries, apples and cinnamon”