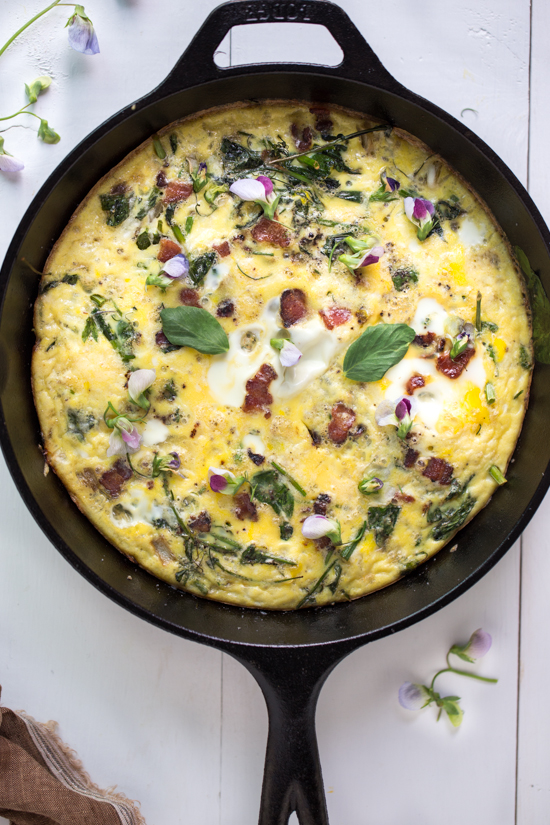 CSA season is here! For those of you who might not know, CSA stands for Community Supported Agriculture. What it basically  means is that you buy a share of a local farm and in return you receive a basket or box of produce every week during the growing season.

Joining a CSA is a great way to eat local and support your local farmers. It also comes in handy if you are not so inclined to have your own veggie garden or, if you’re like me, and don’t have the space in your yard. Ok, so I’m not really inclined, either but I do have dreams of raised vegetable beds as far as the eye can see. And chickens. I totally want some chickens. 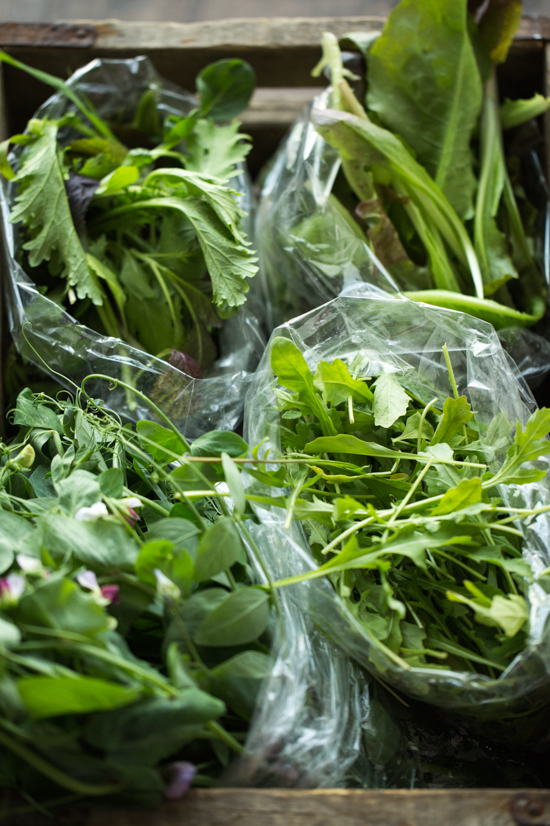 Due to the fact that an expansive vegetable garden and a chicken coop are not in my near future, we opted into a half vegetable share and a half egg share through our CSA, which is called Shared Legacy Farms. The half vegetable share means that we get about half the vegetables of a full share (which is plenty for the size of our family) every week, and the half egg share means that we get one dozen farm fresh eggs every other week. I wanted to start out small this year to get the feel for how much we would be receiving and therefore, how I would be able to keep up with it. 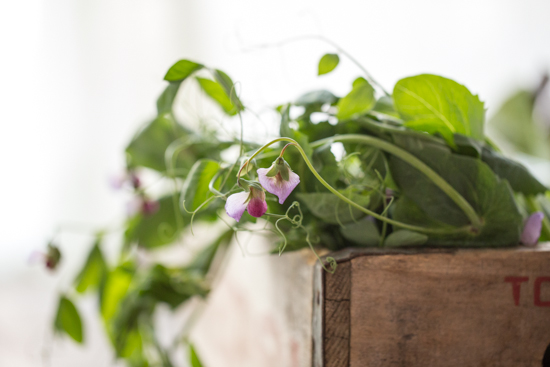 Due to the mild start of the season (which gave us frosts well into May) the first week of our baskets was delayed until last week. I was bursting with excitement to pick up our first basket, which also included our first week of eggs and a few jars of local honey that we had ordered, as well.

In our baskets, we were greeted with arugula, braising mix (which as far as I could tell was a variety of cooking greens), cut lettuce and pea shoots. 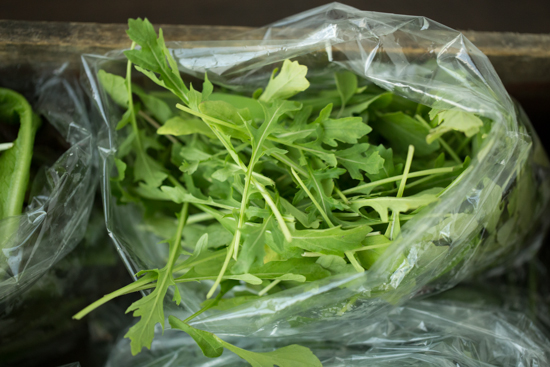 When I had received the email from our farmers about what was going to be in the basket last week, I was a bit stumped on the pea shoots. I had never heard of them. But that in itself is one of the very reasons I wanted to join a CSA: exposure to new produce.

No more bee-lining toward the tomatoes, bell peppers and broccoli and forgetting the rest or the market offerings. 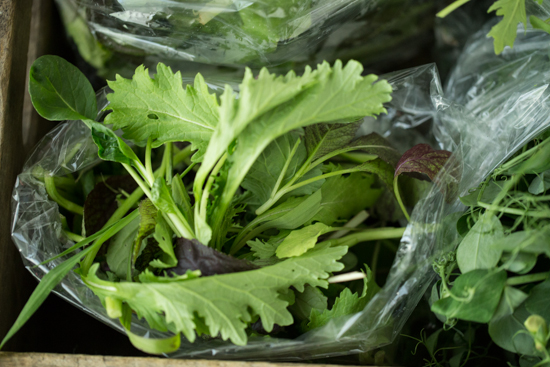 Don’t get me wrong, I am a vegetable lover, and try to buy a variety while at the market. But I know myself well enough to know that I get in ruts. The same items come home with me time and time again, and frankly, they’re probably just as sick of me as I am of them. Well, that stops here and now because now I’m the proud owner of pea shoots, folks!

Now what in the world am I supposed to do with pea shoots? Flowering pea shoots, no less. 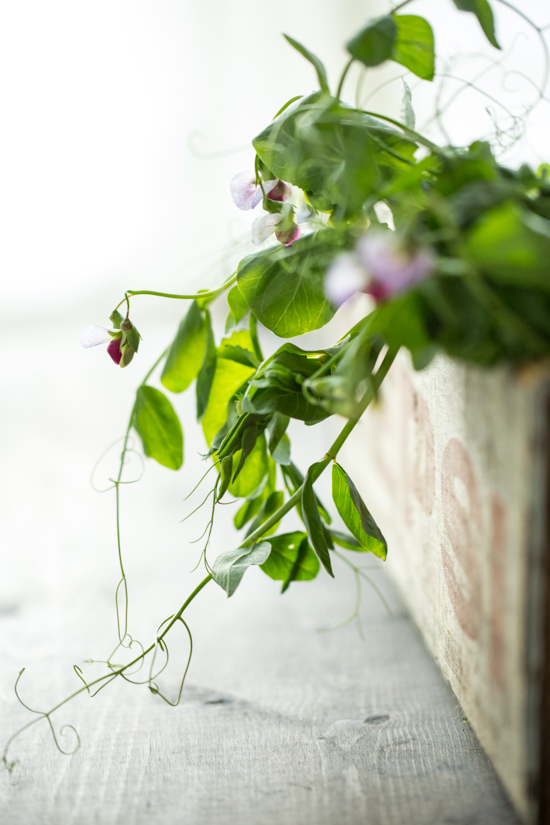 After a bit of Googling, it turns out pea shoots can be used like you would use any green.  I wanted to come up with a recipe that would use several items from our CSA treasures and decided to try my hand at a frittata.

Yes, I had never made a frittata before. Seriously. We eat eggs multiple times a week, so I don’t know what my problem was that I hadn’t made one of these incredibly easy, satisfying and fancy-ish treats.  Plus, it was the perfect dish to showcase our farm fresh eggs and new-to-me pea shoots.

I had some bacon and a leftover onion half in my fridge and the recipe started building itself in my head. A bit of onion sauteed in a touch of bacon fat would be the base to this dish. Next step was to add in the delightfully sweet pea shoots.

It turns out, that pea tendrils taste just like peas. I’m not kidding, it’s almost bizarre. Or it would be bizarre if they weren’t so wonderful. Like a  hidden gem bursting with sweet pea essence. Just be sure to remove the stems. I made the mistake of chopping the stems and leaving them in. Bad idea. They were too tough to eat and caused a bit of a problem. The leaves on the other hand…oy. So, so good. In fact, they are my new favorite and I hope we have a few more weeks of those tender green leaves to look forward to.

I also added the beautiful, delicate pea shoot flowers into the frittata. The Baby loved eating the flowers. She felt very fancy.

I have a feeling there will be many CSA Frittatas in our future this year, but no two will ever be the same. 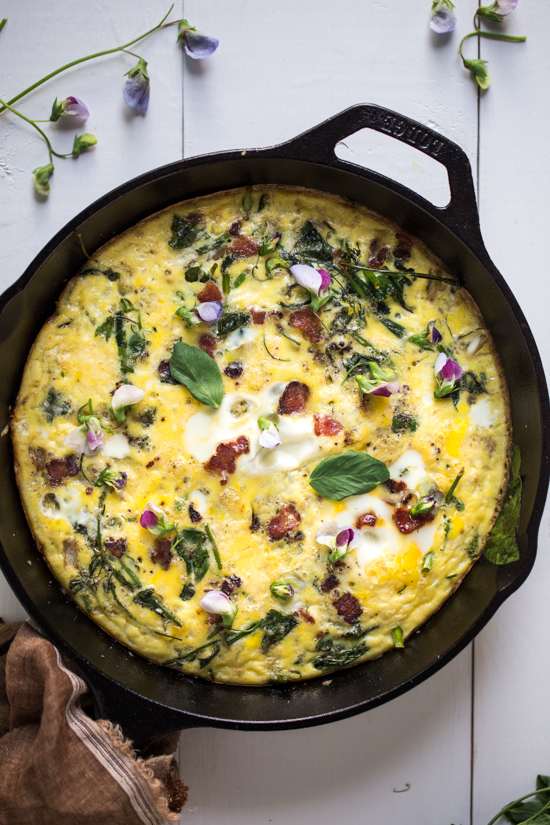 In a 10 inch cast iron skillet set over medium/high heat, fry bacon until crisp. Remove bacon to a paper towel lined plate. If there is not much fat left in the skillet from the bacon, add olive oil. Saute onions until soft and translucent. Add in pea shoots and saute until wilted. Season well with salt and pepper and sprinkle with cheese. Remove skillet from heat. In a large bowl, add eggs and whisk to scramble. Pour eggs over vegetables in the pan. Crumble bacon over the eggs and place skillet into preheated oven. Bake for 10-12 minutes or until eggs are cooked through. Slice and serve!

Test frittata for doneness by piercing center with a knife. If the slit fills with liquid, allow to cook for several minutes. If slit keeps it's shape, the frittata is done.
Print Recipe
posted in breakfast, dinner, lunch, recipes, spring, summer
16 comments »

16 comments on “csa frittata with pea shoots and bacon”