I have a thing for mini desserts. They’re tiny, adorable and have a built in serving size that attempts to save me from myself. Myself and my love of desserts, that is. There is something rebellious about eating an entire dessert all by yourself and not having to cut it up and share pieces with your friends. And in this case rebellious = fantastic. 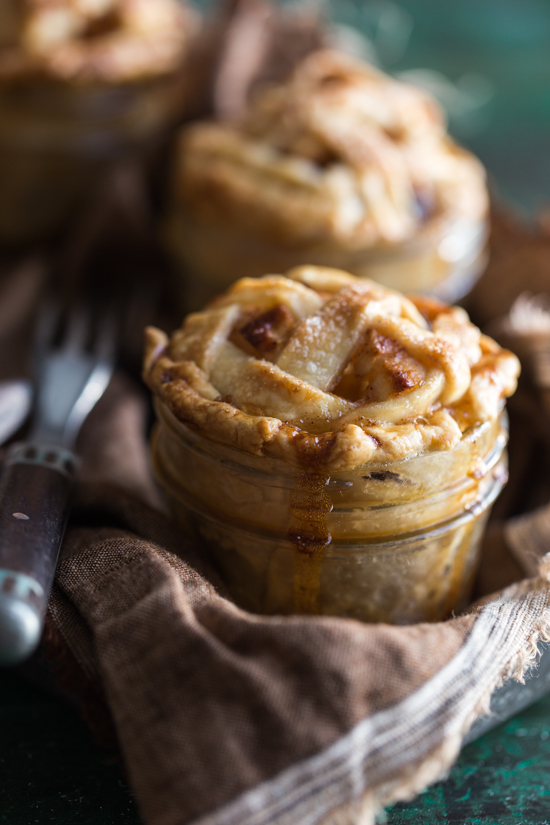 Let’s talk about these Apple Raisin Pies in Jars. The idea for them came about in an unusual way. I was inspired to bake an apple raisin dessert because I ate this apple cinnamon raisins yogurt that rocked my world. Seriously, I’m not one to get all that jazzed about yogurt, but this was really tasty.

It got me thinking that raisins need to be put into more desserts. I’m not sure why I don’t use raisins more, but they are the unsung heroes of dried fruit. Not as glamorous as dried figs, although infinitely more attractive than a prune. Poor prunes always get a bad wrap.

Anyway, I’m on a tangent about dried fruit when what I really should be talking about are these completely easy, sweetly spiced apple raisin pies. They were perfectly golden, with a sweet and tender filling. 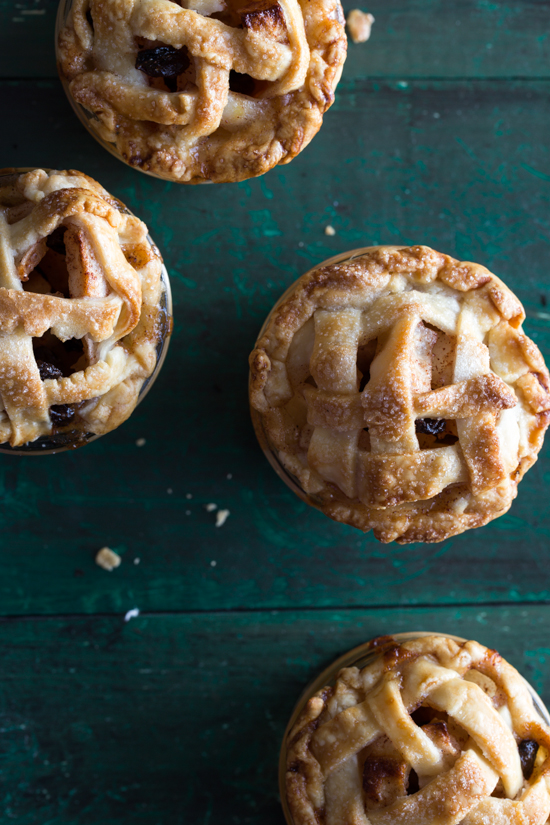 I had a leftover pie crust in the fridge after making my comfort-in-a-casserole-dish Autumn Chicken Pot Pie, so I figured I had the perfect excuse to whip up some pie. On a Wednesday, no less. That’s how easy these were. I actually assembled them in the morning, popped them in the fridge, and then baked them off while we ate dinner.

Then BOOM: fresh apple raisin pie for dessert. Not too shabby for a weekday. Especially when we eat scrambled eggs twice a week for dinner. See? Life of a food blogger isn’t always so glamorous. But then, there is pie to make up for it.

I just hope the kiddos grow up remembering the pie nights. I should make pie more often, and so should you. Seriously. I’m officially calling this ‘Pie Wednesday’. 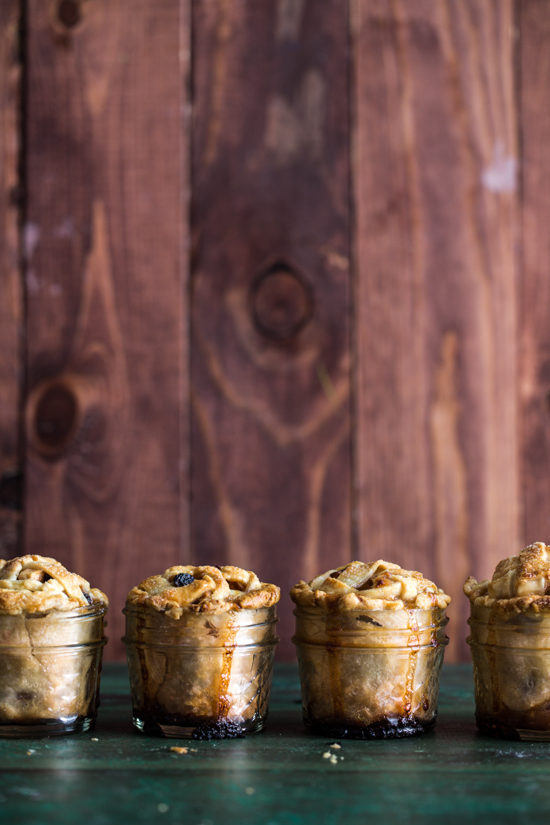 In a large bowl, mix together apples, raisins, lemon juice, cinnamon, allspice, nutmeg, 2 tablespoons of sugar and flour. Set aside.

On a lightly floured surface, roll out pie dough until almost doubled in size. Using a 4 inch plate as a guide, cut 4 circles out of the dough. Place 1 circle of dough into one 4 oz mason jar (I used 4 oz Ball canning jars). Use fingers to press dough into the sides of the jar. Dough should hang over the lip of the jar by about 1/3 inch. If it doesn't, cut small strips of dough from the scrap and pinch it to the dough lining to create a small overhang around the mouth of the jar. Repeat with the remaining 3 pies. Cut extra dough strips into 1/3 inch strips for the lattice pieces.

Divide apple filling amongst the 4 pie jars. The mixture will be heaping a bit. Place the reserved strips of dough over the filling (creating a lattice if desired) and crimp up the edges of the dough, sealing together ends of lattice pieces and the overhang of the bottom crust. Place pie jars onto a rimmed baking sheet.

In a small bowl, beat the egg with 1 teaspoon of water. Brush tops of pie crust with egg wash and sprinkle with remaining 2 teaspoons of sugar. Bake pies for 35 minutes or until crust is golden and filling is bubbly.

Allow to cool before serving.

Lining the jars with dough is a very forgiving process. If your dough tears, or you need to patch a hole, simply take a small piece of dough and press it into the area that needs patched.

If you don't want to do lattice topped pies, experiment with other decorative configurations of dough! The possibilities are endless!