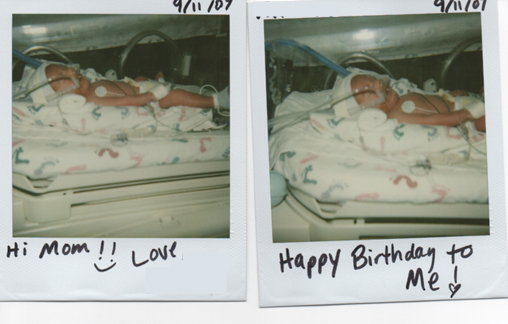 Today, my baby boy turns 5. I realize that 5 is decidedly un-baby like in age, but to me, as clichéd as this sounds, he will forever be my baby. My little guy who changed our life, both surprised and terrified us, and who gave us a reason to have faith and hope. Thinking back on his birthday, and if I am being honest, the entire year of 2007, is at the same time difficult and heartwarming. But I can’t help but think of it, and almost feel as if that life, these events, belonged to different people. But then I look at my little buddy, and I know it was us. I am and will always be forever grateful it was us.On August 22, 2007, my husband underwent surgery to remove a mass found by his doctors. This was following months of him being sick, and, well, just off. Going into the surgery, his doctor’s were optimistic that the mass hadn’t turned into anything scary (dare I say the ‘C’ word), so we hoped and prayed they were right, and that this surgery was just that; a preventative action. That being said, it was a major surgery. One without a clear outcome. It wasn’t until the doctor’s opened him up, that they were able to get a clear picture of what was going on, and in turn, what would need to be done.
In the pre-op area, I held his hand, kissed him, told him I loved him and that I would see him soon. I was terrified.  A surprisingly short amount of time later, I (along with my parents, Mother-in-law, Aunt, and Brother-in-law) was called back to a room to talk to the surgeon. I was immediately nervous. Other families had been approached directly in the waiting room with good news and words of encouragement from their doctors following their loved ones’ surgeries. Why were we being pulled into a room? What was going on? It was almost too much for my 25 year old, 7 month pregnant self to comprehend.
My husband’s surgeon immediately assured us that the surgery was successful, and my husband got through it just fine.  I sensed the other shoe dropping. Upon removing the mass (and with it, a 3rd of his colon), the doctor told us, with the confidence of a surgeon who has seen these cases countless times before, that what he removed was, in all probability, a carcinoma. Carcinoma? The word rattled around in my brain before finally settling with an oppressive weight at the base of my scull. Cancer. He has cancer. He was 27 years old. How could this be? I broke down. I can’t lose him. I cried, sobbed, heaved. The surgeon talked on, in kind, but direct words, most of which I can’t remember. I couldn’t focus. I was so grateful (and still am) to have had my husband’s Aunt with us. She, being a nurse, had the wherewithal to ask the questions the rest of us couldn’t quite form. When the doctor was finished, I pulled myself together as quickly as I could, because I was told he was in post-op and I could go see him. Get myself together enough to see him, kiss him, and not scare him. He wasn’t in any shape to be hearing this yet (as he was barely out of anesthesia). It was later in his room, that I spoke to him. With our family there, and told him what the doctor had said. His reaction was so calm, so classic him, “Ok. What do we have to do?” Very matter of fact. Seemingly not scared (although I still don’t know how he wasn’t bone chillingly terrified like I was). I fell in love with him even more.

We wouldn’t know for until the end of his weeks stay at the hospital, the results of the pathology testing. Was it cancer? Had it traveled to his lymph nodes? We waited. The middle of the week marked an important appointment for me, albeit, an annoying one. One I went through with the surly attitude only a 7 month pregnant girl with a sick husband can really muster. I had been diagnosed with gestational diabetes (yeah, I know, right?) and I was due to get my blood sugar meter, and be taught all about what I could and could no longer eat. So, after that lovely appointment, one in which my mom went with me, and during which, also (graciously, I might add) pretended that I wasn’t acting like a brat to the nurses (bless her heart), I was on full blood sugar checking mode. Eating my little snacks. Checking my sugars. Eating in the hospital cafeteria (yum). Checking my sugars. Stressing out because my husband had a terrible night and was in incredible pain. Checking my sugars. Then stressing out that my sugars were high. Stressing out about the fact that the stress caused the high sugars. Let me tell you, I was a real treat to be around. Yikes. 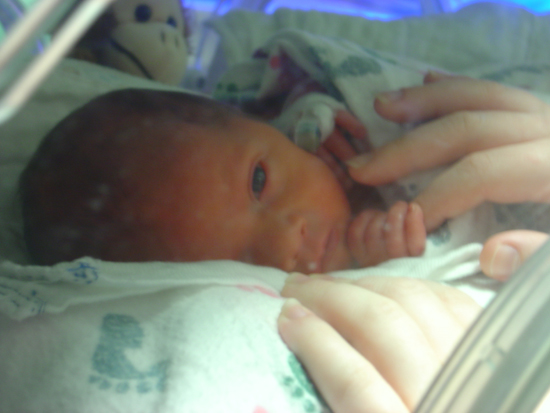 I will never forget holding him for the first time. While the tubes, wires and such weren’t exactly what I had pictured when dreaming about holding him, I knew he was there, safe and taken care of. We were and are extremely blessed that he was healthy. He needed minor and temporary support, and in less than a week, was moved to a step down room. He simply  needed time to grow. To learn to eat and breath at the same time. The things instincts that full term babies are born with. 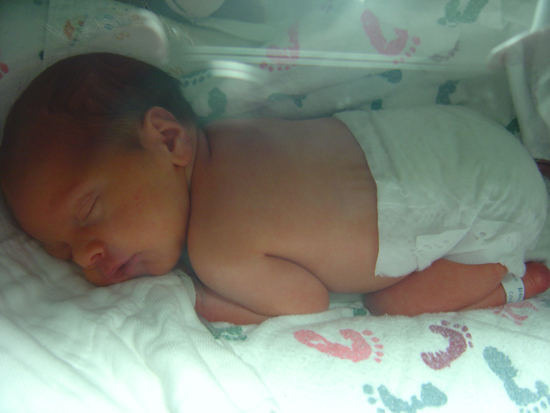 Leaving the hospital without him, was to this day, the hardest thing I have had to do. A piece of my heart was missing. How I envied those mom’s, waiting their in their wheel chairs, holding their baby carriers full of their new bundles of joy. While I stayed until they basically kicked me out, and left (in my giant robe, by the way) at about 11:00 at night. Only to return 2 hours later to visit him again.
Over the next four weeks, things got better. He got stronger, and closer and closer to going home. My husband started his chemotherapy. Our little baby boy was the light in our day. Holding him was a balm on our hearts. We hoped and prayed that everything would be ok, and with him there, we were truly able to believe it. 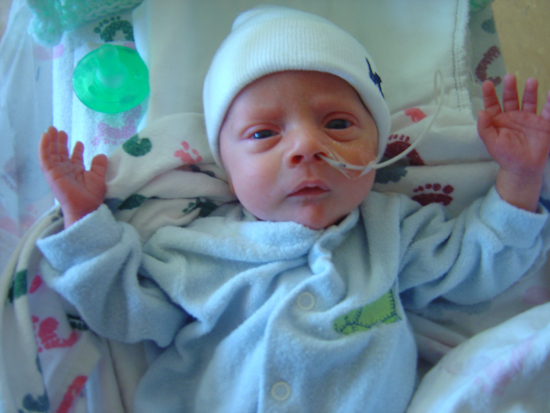 To this day, the doctor’s are not sure what caused him to come early. I could have been the stress of my husband’s illness. But in my heart I know that God sent him to us early, to give us a reason to hope, a reason to fight. Our little guy needed us. We wouldn’t give up. 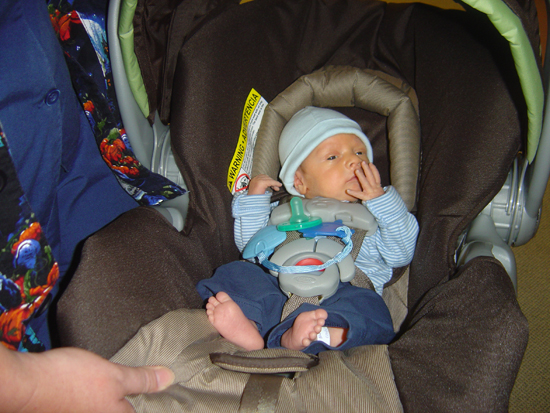 We brought him home three days shy of his one month birthday. It was pure joy.
Happy Birthday, to my sweet baby boy.
posted in life, thoughts
10 comments »