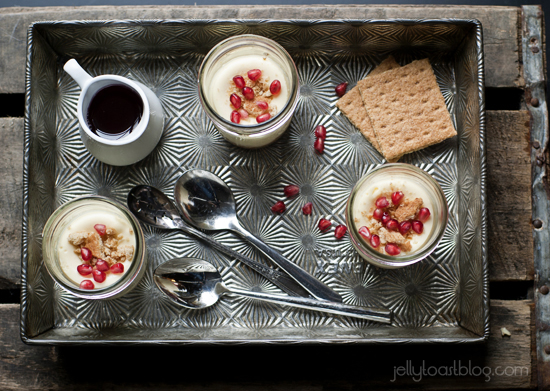 I’m doing something a little unusual tonight. A late-night post. It’s like my very own late night talk show “The Late Post with JellyToast”. Oh, that actually rhymed. I’m a poet and don’t know it. I apologize for that last line. I’m feeling a little punchy because I seem to be eating on piece of candy for every two I pass out. Yes, watch out, I am multitasking bypassing out candy and writing this post at the same time. Two birds, baby, two birds.
It does seem a bit quiet around here, though, and I am wondering if it’s the crummy weather that has held off many of the little monsters and zombies or just that I seem to be eating all of their candy before they can get to it.  It’s a question without an answer.

Speaking of zombies, my favorite costume pair so far has been Officer Rick Grimes and his ‘walker’ companion. It’s as if this pair knew I was knee deep in a season two marathon of ‘The Walking Dead’ and just wanted to make me smile. Thanks, Rick, I appreciate it. And, Rick? I have to tell you,I was just as shocked about the barn full of walkers as you were. Head-sewn-to-the-carpet kind of shocked.
I love checking out the costumes and sizing up the level of dedication of each trick-or-treater. Frankly, if you are under legal drinking age, are wearing a costume, and say ‘trick-or-treat’ and ‘thank you’, you can have as much candy as you want. Unless the amount you want is more than my designated limit of two pieces per treater. Then you need to move on to the next house.

I never really understood why some folks don’t like Halloween. I mean, what’s more fun than spending a night dressed up as someoneelse and going around collecting free sugar? I don’t know that there’s muchelse that could be better. Oh, be right back, I have another trick or treater…

Huh, that was unexpected. A bloody sock monkey. I’ve never seen one of those before.

Anyhoo…let me casually segue into speaking about these delightful little cheesecakes. The inspiration for these cheesecakes came from brilliant and talented Helene of Tartelette. I have been a HUGE fan of Tartelette for along time and am forever drawn into her beautiful photos and sugar laden treats. She never disappoints. If you aren’t familiar with her work, I urge you to go and take a look. I am positive you will not regret it.

Anyways a couple months ago I made her lemon goat cheese cheesecakes and since then, my life has not been the same. They were tangy and creamy and sweet and absolutely everything I could have wanted in a dessert.Even without chocolate-as I am typically a chocoholic-these cakes were utter perfection.  I was unable to stop at one bite – or one cheesecake for that matter. You think the individual serving size would’ve helped me control myself, but alas, no. I told myself ‘listen, there’s only eight, so I might as well enjoy them’. And I did. So much so, that I made them again. 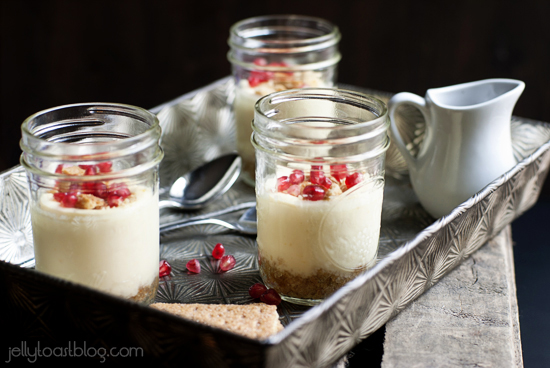 So for Halloween I thought I would dress-up Helene’s amazing perfect lemon goat cheese cheesecakes with a little bit of a Halloween/Fall/Winter costume. The winter part of the costume was inspired by this drippy, cold weather. I was thinking of Fall fruits, and I first thought of apples, but quickly scratched that idea. Then I thought of pomegranates. Perfect. 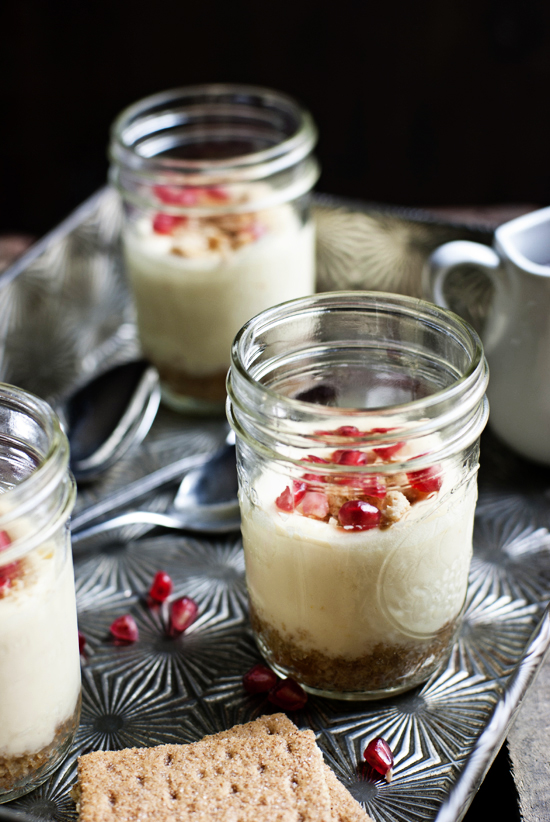 Preheat the oven to 325F and position a rack in the middle. Place 8-6 oz ramekins or 8 ½ pint mason jars in a large roasting pan.

In a medium bowl, stir together the graham cracker crumbs, the melted butter and sugar. Divide the mixture evenly among the ramekins and pat down with a spoon or honey drizzler (this works really well if you have one). Bake for 5 minutes, remove from oven and let cool. Lower the heat to 300F.

In the bowl of a stand mixer fitted with the paddle attachment, beat together sugar, cheeses and orange zest until light and fluffy. Add the eggs, one at a time making sure you incorporate them well after each one. Add the orange juice and beat another 30seconds. Divide the mixture evenly among the ramekins. Add enough hot water to the roasting pan to come up about 1 inch on the sides of the ramekins.

Bake the mini cheesecakes for 20-22 minutes or until still slightly wiggly in the centers. Let them cool and garnish them with pomegranate syrup, crushed graham crackers and a few extra pomegranate seeds.

In a small sauce pan,combine water, sugar and pomegranate seeds and bring to a boil. Reduce heat and simmer about 10 minutes. Allow syrup to cool completely in the pan. Strain out and discard seeds and serve syrup on top of cheesecakes. Refrigerate any unused syrup in an airtight container for up to two weeks.