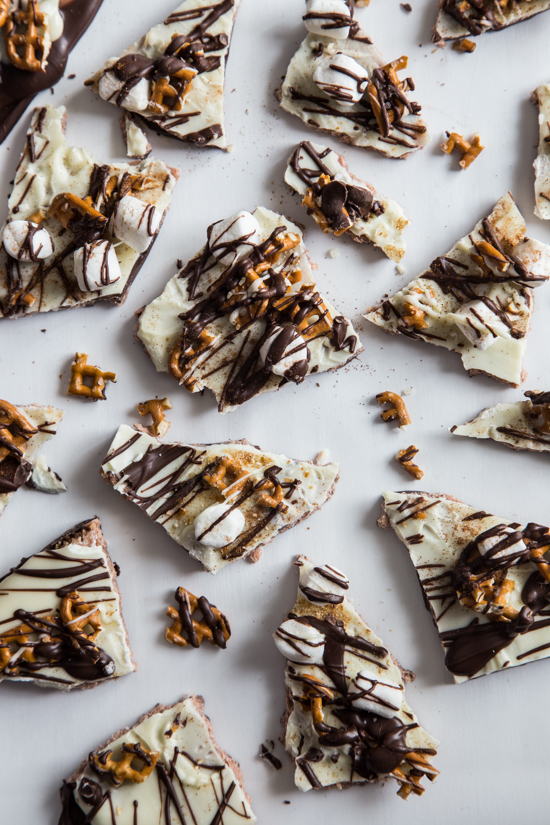 This post is sponsored on behalf of Campfire® Marshmallows. All opinions are 100% my own.

Last night, as I was tucking the Buddy into bed, I realized that this week is his last week of school before Christmas vacation starts. After mentioning it to him, we both sort of looked at each other and were a little stunned. He was thrilled, clearly, but all I could think is, “How can we already be so close to Christmas?” I think so much negative emphasis has been put on how early everyone starts thinking about the holidays, but I for one am glad it starts early. If we waited until December 1st, I would be crushed that I only got to enjoy a few weeks of Christmas music, our tree and *gasp* holiday baking.

And that would be tragic. 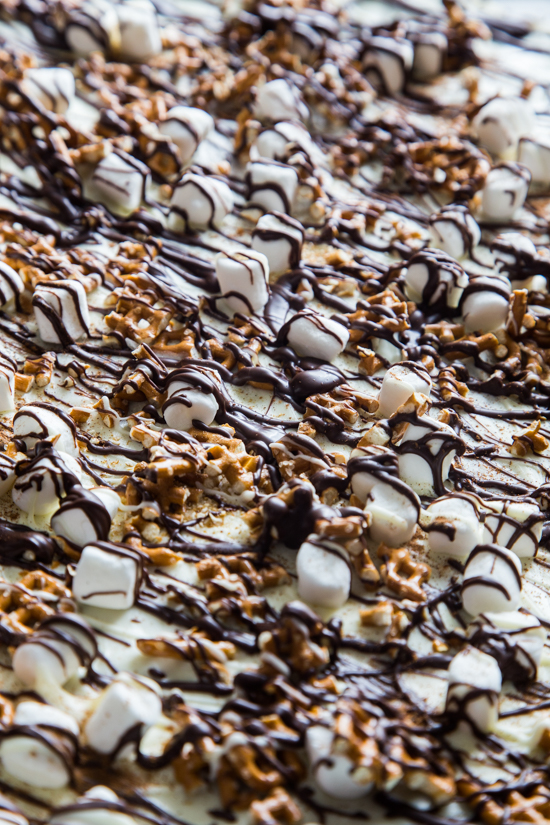 Last Monday, I got together with my mom and sisters and we had our annual holiday baking party/exchange. True to form, I was terribly unprepared and decided to whip up a few no-bake treats to share. Knowing that we were starting early enough in the month, I realized that I would probably have to do some more baking closer to Christmas to make sure we had some treats all the way through. It took some serious pressure off and allowed me to experiment with some new recipes. This Marshmallow Fudge Bark was one of them.

I have always wanted to try making fudge from marshmallows and have been coming across recipes for years. But for me, plain old fudge didn’t seem quite exciting enough for our exchange, so I decided to take the marshmallow fudge and turn it into the center layer in a fabulous holiday bark.

I seriously love no-bake recipes, especially barks. They are so forgiving and completely adaptable to what you have on hand. In the past I’ve used matzo crackers as the base for some pretty spectacular bark, but this time, I wanted it to be extra chocolatey so started with a base of melted candy wafers. You can see the entire recipe (including my little helper) in my marshmallow fudge bark video:

C loved getting in on the action of spreading the melted wafers, although she disappeared to watch Frosty the Snowman while the fudge was chilling and didn’t return until it was over. That’s what happens when your sous chef is five. 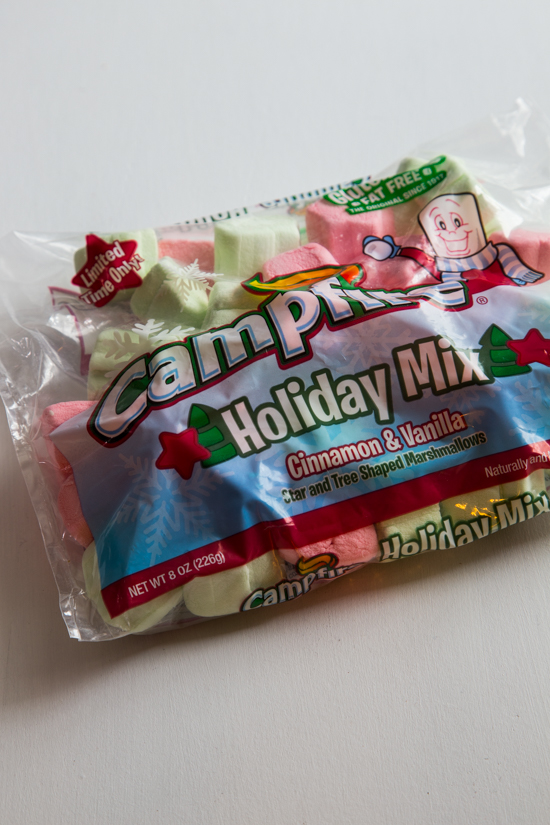 This bark is so easy, but such a crowd pleaser. It’s chocolatey and full of marshmallows, both in the bark layer and on top with a sprinkling of the Campfire® mini marshmallows. The pretzels add crunch and a bit of saltiness that keep the bark from being too sweet, although it is quite a sweet treat. You can play around with your flavors by adding nuts or dried fruit to the top. Either or both would be delicious! 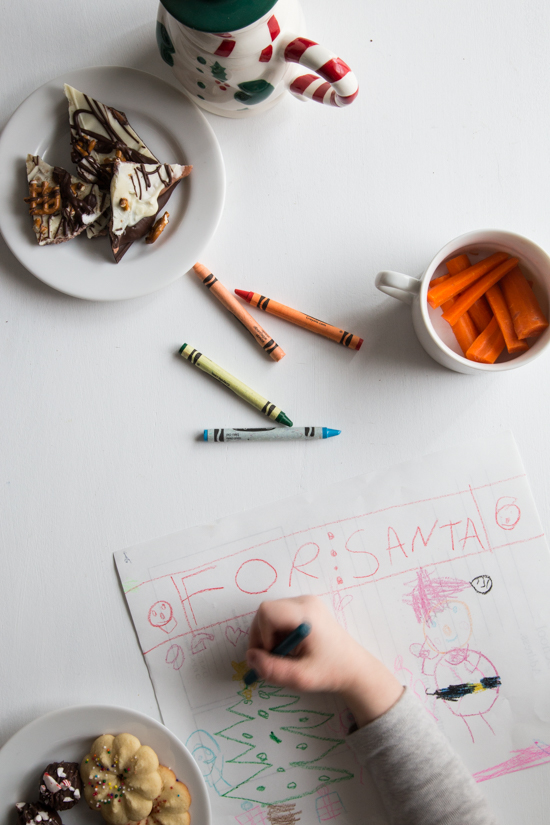 This bark was such a hit, that C decided it would be our official treat for the jolly guy this year. She’s already preparing for the big night, as  you can see.

And as much emphasis as we put on cookies for Santa, the kids never forget to put out carrots for the reindeer. Although I’m thinking that the reindeer will want a bit of this marshmallow fudge bark, as well. 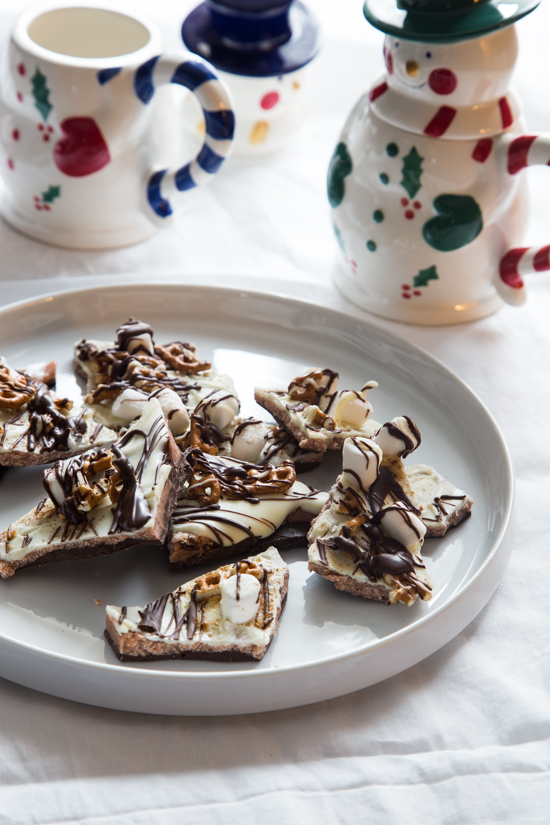 You may remember from my Twice Baked Sweet Potatoes post that Jamie from My Baking Addiction and I have proudly teamed up with Campfire® Marshmallows to bring you fun, delicious and seasonal recipes featuring their fabulous marshmallows. For more information about their products, please visit their website and find them on Facebook, Pinterest, Twitter and Instagram and be sure to stay tuned here for more marshmallowy goodness to come.

Line a rimmed baking sheet with parchment paper. Spread 12 ounces of melted dark candy wafers into an even layer on prepared baking sheet. Chill until firm.

In a large pot, melt butter and add sugar and half and half. While stirring continuously, bring to a boil. Allow mixture to bubble for 5 minutes. Remove from heat and stir in marshmallows, white chocolate chips, 1/4 teaspoon of cinnamon and cardamom and stir until marshmallows are completely melted. Mixture should be thick. Spoon mixture on top of dark candy layer and spread carefully with a spatula (see notes).

When adding fudge layer to the bark, the heat may remelt the dark candy layer a bit. Don't worry! Just do your best to even out the layer and chill until firm. The beauty of this recipe is that it's very forgiving. The white candy layer covers up any imperfections on the bottom layers.
Print Recipe
posted in dessert, kids in the kitchen, recipe videos, recipes
12 comments »